I’ve managed to get a little free time, and I’ve decided to do a series of posts looking at the vital question of whether we are on the way to ending reliance on coal as a source of energy. I’m going to focus first on thermal coal used for electricity generation. We have the apparent contradiction of a resurgence in coal prices combined with ample evidence that new coal plants are no longer economic, and that, when health costs are taken into account, the same is true of most existing coal plants.

I’m going to start with a “fact sheet” issued by the pro-coal Monash Forum. Interestingly, it draws on the work of the anti-coal site CoalSwarm, so there’s a fair bit of basic agreement.  Here’s the sheet 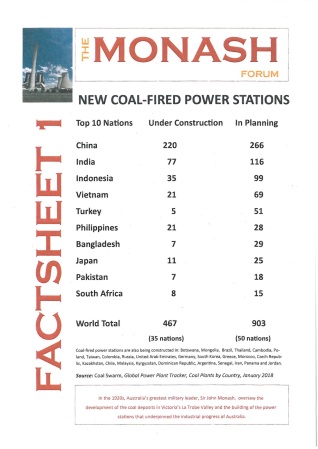 These numbers are taken from the table Coal Plants by Country (Units) which is available in a convenient Google Docs form.  They are accurate as far as they go – Monash has extracted the top ten countries* in terms of planned plants, and given the total over all countries. If all these plants are constructed and operate for a lifetime of 40 years, there will be continuing demand for coal well into the future, and no hope for a stable climate.

However, the table has a lot more interesting information, not reported by Monash. Here’s a table with the same countries and all the columns.

The complete table gives a rather different story to that told by the Monash Forum. The number of plants cancelled since 2010, nearly 200 per year, is substantially greater than the number still in planning.  The crucial question is whether the trend of cancellation will continue, so that the vast majority of planned plants are never built.  That’s what needs to happen if we are to have any chance of saving the global environment.

The evidence from the table shows that the necessary scale of cancellations is possible. If the 2010-2017 trend continued for another five years, the pipeline of planned projects would be wiped out**.  Such a total wipeout is unlikely, but its equally unlikely that all the projects in the list will go ahead. I’ll try to say a bit more about this in later posts.

One promising straw in the wind: A few days after the release of the Monash fact sheet, the Pudimadaka Ultra Mega Power Project, a proposed 4 *1000-megawatt coal-fired power station in India, was cancelled. As I understand the table, this counts as four units off the list. There’s still nearly 900 to go but every little helps.

* For some reason, South Africa (11th) was included and Zimbabwe (10th) omitted. It’s not important, but I’ve included both in my list.

** Some projects under construction may also be cancelled. A close look at the state of progress would be needed to make an estimate of the possibilities.

22 thoughts on “Are we on the way to ending coal: the coal plant pipeline”